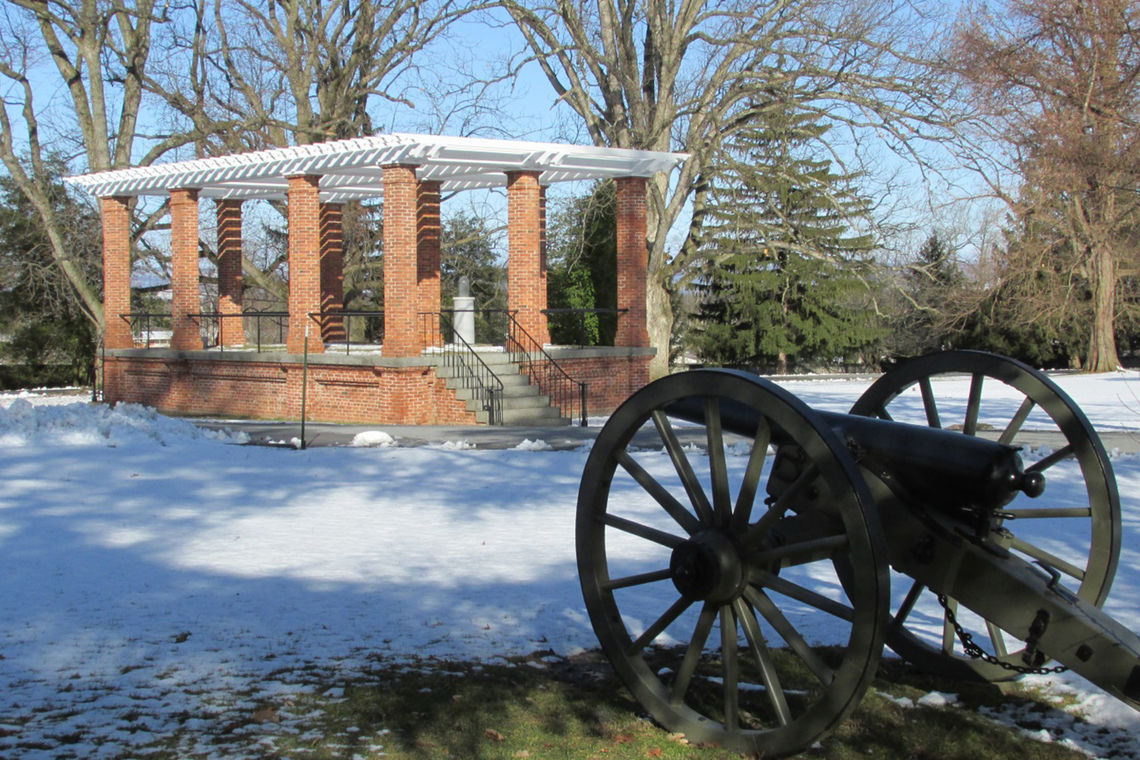 Working with the National Park Service at historically and culturally significant sites throughout the United States has afforded those of us at GWWO unique glimpses into our nation’s history and resources. This exposure is a highlight of my career and is what brings me to share some information on the simple but noteworthy structure known as a “rostrum.” These structures have become known to me through our work on several projects with the National Park Service. The structures were constructed as permanent speaking platforms for commemorative events in numerous national cemeteries around the country.

On November 19, 2013, Gettysburg National Military Park commemorated the 150th anniversary of President Lincoln’s Gettysburg Address. Although the address was not delivered at the site, the National Park Service held commemorative events at Soldiers’ National Cemetery, with its historic rostrum acting as the main stage. The rostrum is one of several constructed based on one of two prototype designs developed by the US Quartermaster General in 1878 for use in Civil War era national cemeteries. Other similar restored structures can be found at Antietam National Battlefield in Maryland and Stones River National Battlefield in Tennessee and variations of the design exist at several other national cemeteries.

Construction of the rostrum at Gettysburg began in the winter of 1879 and was complete by summer of the same year. The open structure allows speakers to be visible to large outdoor audiences and provides a formalized setting for commemorative events. It has repeatedly played host to Dedication Day events.

In 2011, the National Park Service engaged GWWO to assist in design efforts for restoration of the Gettysburg rostrum to its 1879 appearance. In the late 1960s, the wooden trellis topping the structure had deteriorated and was replaced with a much simplified version of the original. It was around the same time that many of the rostrums of both prototypes unfortunately were partially or fully demolished. Luckily the Gettysburg structure remained and using a combination of vintage drawings, historic photos, and investigation of other prototype rostrums, GWWO was able to design a replacement cedar trellis emulating the original.

Brick and stone work, although extensively restored in the early 1970s, had suffered significant mortar deterioration due to improper cementitious mortars and poor drainage behind the walls. GWWO specified historically appropriate lime mortar for re-pointing of the entire structure. Non-historic brick pavers on the upper level were removed and a new drainage system created. The upper surface was planted with sod as it had been originally. The rostrum stands today as a platform for and a handsome backdrop to the important Civil War sesquicentennial events that have taken place over the past two years.

Following our work at Gettysburg, GWWO began working with the National Park Service at Petersburg National Battlefield in Virginia to rehabilitate the Poplar Grove National Cemetery. As part of an extensive project to return the Civil War era cemetery to its early twentieth century appearance, the work also involves restoration of a rostrum, this one representing the second of the two 1878 Quartermaster General prototype designs. Completed in 1897 and likely the most well preserved remaining example of the second prototype, it has a similar brick and stone base to the Gettysburg design but is octagonal in plan and is topped with an ornate iron superstructure in lieu of masonry and wood. We look forward to addressing similar preservation and restoration issues as this project moves forward and we are excited to see more of these small but important structures restored and preserved.

GWWO architect Bryan Fisher has worked with the National Park Service on more than a dozen projects, as well as with Delaware State Parks and the Smithsonian Institution on efforts that have involved the study, preservation and rehabilitation of significant historic structures.