John Gregg and Eric Feiss Are Named Principals of GWWO 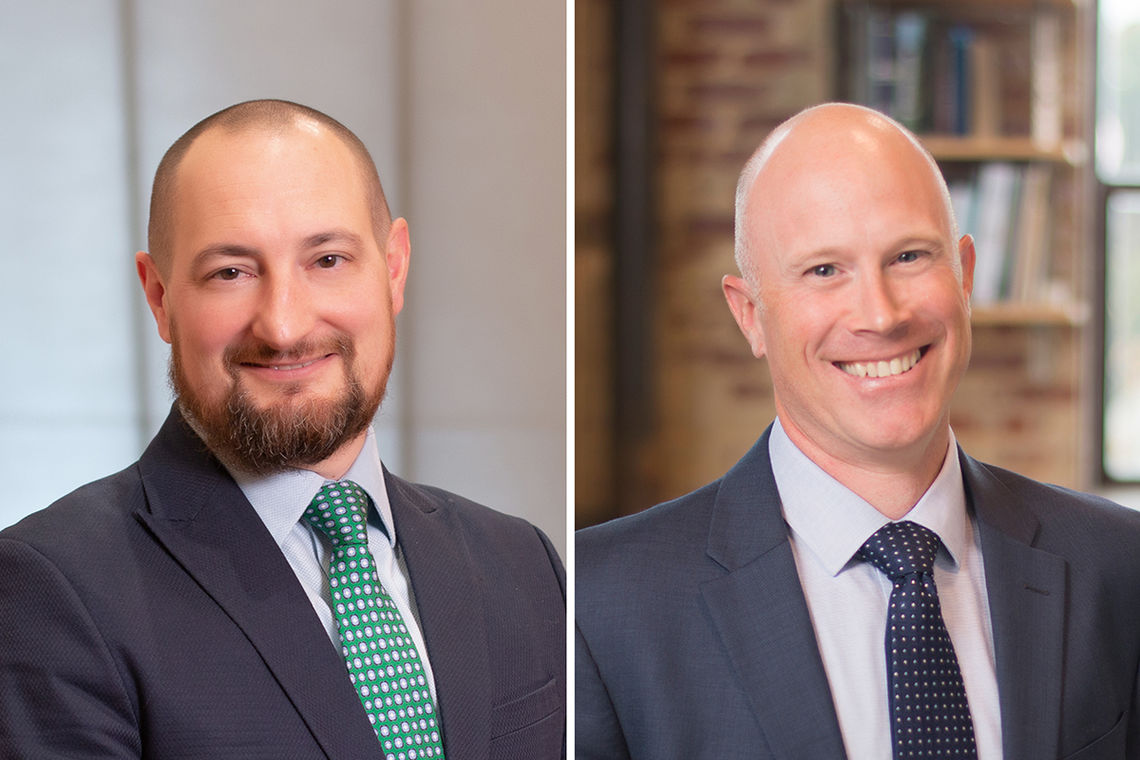 GWWO’s Board of Directors has named John Gregg and Eric Feiss principals of the firm.

They will join firm president Alan Reed and principals Paul Hume, Mark Lapointe,  Terry Squyres, and Laura Werther in the leadership of GWWO. As principals they will manage all aspects of the firm, assist in the formulation of company policy, and position the company for ongoing success.

“John and Eric have long been integral to the success of our firm,” says Reed. “We are pleased to be working side by side with them as we begin the next chapter of GWWO’s story.”

John Gregg joined GWWO in 1999, was named an Associate of the firm in 2003, became a Senior Associate in 2005, and an Associate Principal in 2014. John has focused his career on park and recreation projects, including many for the National Park Service, as well as other federal, state, and local government agencies. His experience ranges from the preservation, restoration, and rehabilitation of historic buildings according to the Secretary of the Interior’s Standards, to the design of entirely new facilities that are contextually appropriate within historically and culturally-sensitive sites, to new buildings and athletic facilities at the collegiate level.

He has served as team leader for the majority of the firm’s work with the National Park Service, and has overseen and been involved on many of the firm’s significant projects including the Hampton National Historic Site Hampton Mansion, Fort McHenry National Monument & Historic Shrine Visitor Center, Port Canaveral Exploration Tower, and National WWI Memorial in Washington, DC.

John is an active member and committed supporter of organizations within the architecture and historic preservation communities, including serving as a peer reviewer for articles published in the Association for Preservation Technology’s APT Bulletin. He is also an active member with the Society for the Advancement of Value Engineering, including Past President of the National Capital Chapter, and is a certified Value Methodology Associate. He also currently serves on the Building Congress & Exchange’s 2020 Board of Directors. John holds both Bachelor of Architecture and Bachelor of Environmental Science degrees from Ball State University.

Eric Feiss joined the firm in 2005, was named Associate in 2008, Senior Associate in 2013, and Associate Principal in 2016. Eric has spent his career working as a team leader, project manager, and architect, fostering creative design processes, developing technically sound and detailed construction drawings, and completing well-detailed buildings for educational and institutional clients. He is a skilled architect capable of facilitating project communications and directing large, multi-faceted teams of design professionals to successfully complete complex projects. He keeps a constant pulse on the construction marketplace and is dedicated to helping clients achieve their monetary, scheduling, and programmatic goals.

Eric is an involved member of the architectural community having chaired the AIA Baltimore Technology in Practice Committee, served as a guest juror for the Morgan State University School of Architecture and Planning, and as an adjunct faculty member at Morgan. He was also instrumental in GWWO’s implementation and continued use of Building Information Modeling (BIM) technology, serving as an educator and frequent speaker on its use and benefits, and is Past President of the Baltimore Revit Users Group. Eric holds a Master of Architecture degree from Morgan State University and a Bachelor of Arts degree from Franklin & Marshall College.

Construction Kicks Off on the National WWI Memorial in Washington, DC