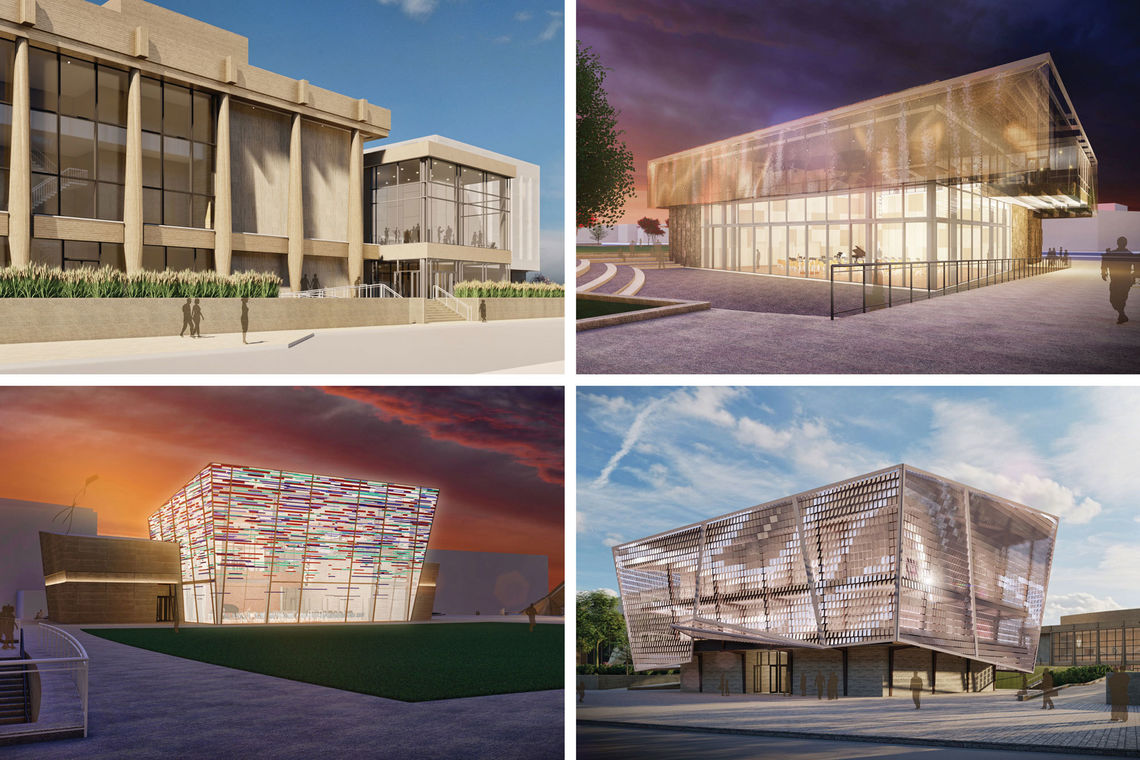 GWWO, in collaboration with Norfolk-based VIA design architects, is honored to have received the Hampton Roads Association for Commercial Real Estate (HRACRE) Award of Excellence for Best Conceptual Design for the Chrysler Hall + Scope Plaza Visioning project.

Yearly, hundreds of entries from the Hampton Roads area are submitted to be judged and recognized for their excellence in development design. Our team enjoyed the opportunity to think creatively with the City of Norfolk and stakeholder groups to develop a vibrant and engaging vision for the Chrysler Hall + Scope Plaza that celebrates the arts and stands in harmony with the existing iconic architecture.

Debuting in 1972, the Chrysler-Scope Complex was representative of cutting-edge urban design and is geographically positioned as the lynch pin between three major districts of Norfolk’s urban core: Downtown business, NEON arts, and the new St. Paul’s Quadrant. Despite its strategic location, the complex doesn’t function to its potential and its surrounding walls are a deterrent to use. The performance hall and arena are well-loved by the community and continue to host a diverse range of events, but the elevated plaza is underutilized, uninviting, and largely inaccessible.

Initially commissioned by the City of Norfolk to design a renovation to the historic Chrysler Hall, the City realized that the first step of the process was to take a step back and imagine what was possible for the whole complex. As part of a separate visioning effort, the design team sought to reimagine the plaza for all-occasion use, support outdoor performances, and enhance the daily lives of downtown residents and the business community. This included the development of a conceptual vision for a new performance space to fill a void in small-medium venues, support a variety of performances, and host community functions.

The design team looked at four possible locations within the plaza for the new building. Each site was carefully considered based on its potential to activate the plaza, complete the campus, and complement the architecture of Chrysler Hall and Scope Arena. The judges were highly impressed in the design team’s ability to provide the City of Norfolk with four well thought out plans and approaches.

Located on the south side of the plaza and facing St. Paul's Boulevard, this addition to Chrysler Hall mimics the rectangular form and materiality of the current facility. The strong belt course, or horizontal band, that loops around Chrysler continues around the new structure.

Sited between Chrysler Hall and Scope Arena, Beat is clad in a complementary stone and glass. Metal curtains drape the second level providing a sense of movement as they drift with the wind, shimmer in the sun, and create their own song.

Positioned at the corner of Monticello Avenue and E. Charlotte Street, Melody stands in conversation with Chrysler Hall. A two-story glass form emerges from the stone façade and puts the arts on stage. Utilizing parametric design tools, the design team reinterpreted symphonic music to generate the dynamic façade treatment. Raiseable doors allow performances to spill onto the newly lush plaza and engage passersby. Respectful of its close relationship to Chrysler, a band of light around the exterior represents a modern interpretation of Chrysler’s belt course.

On the same site as Melody, Harmony raises the facility’s prominence by adding a public gathering space within the first level. Like Melody, parametric design was used to create the engaging faceted glass exterior that appears to dance with shifting viewpoints. A glowing beacon from all sides, Harmony enthusiastically embraces its role as the crown jewel.

To perform this work, the team conducted workshops, charrettes, and presentations with the support of project stakeholders, city staff, patrons, and supporting consultant team members to develop a design direction for the project. Upon completion of the visioning phase, the City ultimately decided to focus the project solely on renovating Chrysler Hall. However, the excitement generated by the concepts presented affords a sense of optimism that this will someday become a reality.

To learn more about each of the design concepts, please see the concept reveal.

Design with Computation in Mind

by Kevin Miller
See More
See All News & Insights
Sorry, your browser is out of date
The web browser you are using is too old to view this site. Please update your browser or use Internet Explorer 11 or the current version of Microsoft Edge, Firefox, Chrome or Safari. Thank you!