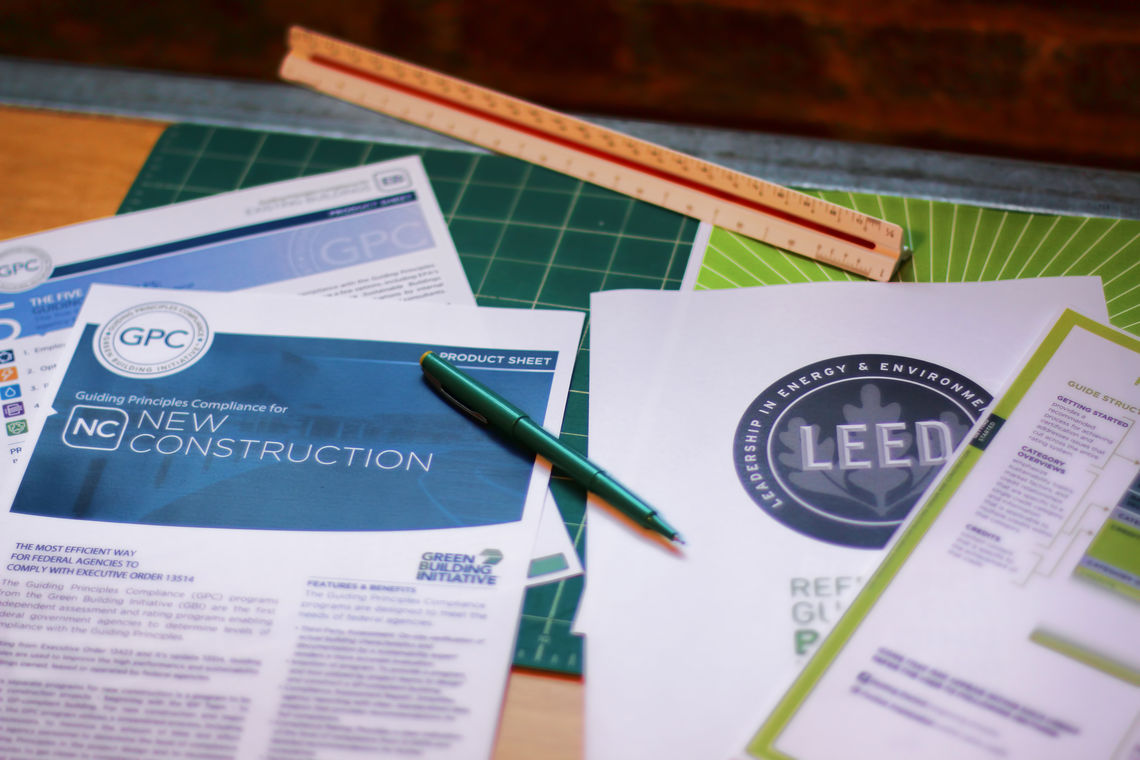 In 2015, an estimated 40-48% of new nonresidential construction by value will be green according to the USGBC.

Specifically, our firm’s location in the Mid-Atlantic is on the higher end of the green spectrum. As of February 2015, our home state of Maryland has the third most LEED registered and certified projects in the US, followed closely by neighboring Virginia. Additionally, DC has one of the greatest proportions of green office buildings relative to the total stock buildings in the market.

As green building continues to grow due to the economy, as well as federal and state mandates and policies, many more clients are requesting LEED Certification for their projects, including a majority of our public clients who require LEED Silver. Established in 1993, the US Green Building Council was the force behind the LEED green building certification system, which was unveiled in March 2000.

However, they aren’t the lone authority. Developed by ECD Energy and Environment Canada and adapted for the US in 2004 by the Green Building Initiative, Green Globes was the second major rating system to hit the market in the US. The following year, the GBI was accredited as a standards developer by the American National Standards Institute and in 2010 the official Green Globes ANSI standards were published.

As of July 28, 2015, there are nearly 54,000 LEED registered and certified projects in the US, 2,880 of which are in the state of Maryland. Contrastingly, there are 716 Green Globes registered and certified projects, 40 of which are in Maryland—with that number anticipated to grow with the US General Service Administration’s approval in 2014 to recognize Green Globes as a recommended certification system. So how do the two programs compare?

While there are many similarities between the two, including a four level rating system, there are also many differences. LEED tends to be more challenging in terms of administration while the actual project fee for Green Globes registration tends to be higher for larger buildings. The certification process for Green Globes includes an online assessment followed by a site visit, while the entire LEED process is comprised of online submittals. Another differentiator is that Green Globes accepts four sustainable forest certifications while the current version of LEED only accepts one, FSC. However, more certifications are expected to be accepted in later versions of LEED. Additionally, LEED 2009 employs seven credit categories (sustainable sites; water efficiency; energy and atmosphere; materials and resources; indoor environmental quality; innovation in design; and regional priority). Green Globes includes eight categories (project management; site; energy; water; materials and resources; emissions; and indoor environment).

As the desire for sustainable buildings continues to grow, it seems as if it’s only a matter of time before more certification bodies emerge, but with the USGBC’s firm grip on the market and the steady growth of Green Globes, is there room? According to the USGBC, there is. In April, the USGBC announced that it would recognize projects achieving the energy and water requirements in the Living Building Challenge, another building certification program, as technically equivalent to LEED. Scot Horst, Chief Product Officer of the USGBC stated that “in the world of rating systems there is a sense of competition between systems, and what we’re saying is that what matters is that people are doing good environmental work.”

Building a School for the Community